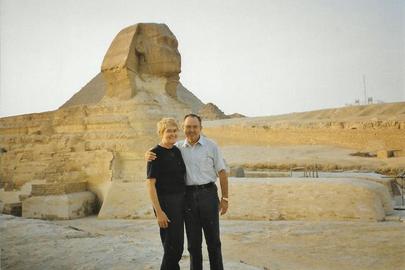 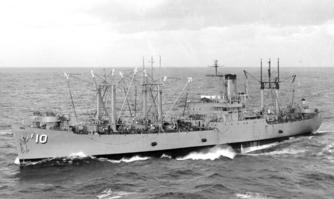 We were thrilled to have Plankowner Casey Garcia and his wife, Barbara, join us at the 12th Reunion in San Diego in 2018.  This was the first time Casey had attended, and we were very happy to still have a Plankowner in our midst.  He served on the Mauna Kea with Willie Scott.

Casey went in the Navy in June, 1955 right out of high school.  He enlisted because he had heard so many stories of traveling to different countries from other veterans.  Also, his parents did not have the money to send him to college.  He came from a family of five brothers and one sister so the money was not there.

He went to boot camp at Great Lakes, Illinois in June, 1955 and his first duty station was “feeding the fleet” on the stores ship USS Aldebaran AF-10, where he made Storekeeper 3rd class.

In December of 1956 he volunteered and was sent to the USS Mauna Kea AE-22 which was built at Sparrows Point, MD and was being supplied for commissioning in April of 1957.

At the time, He met up with two other sailors who were second class and they went in to Dundalk, MD where they shared an apartment.  They were Harold Smith and John Turnbull.  It was great living as they were on per diem until the ship was commissioned, and they had money to spare.

Casey was in the Supply Division and worked in the office.  He was in charge of the clothing store.  He was impressed by the newness of the ship and also the living conditions for the enlisted personnel.  On his old ship of World War Two vintage, they had canvas bunks and foot lockers at the bottom of a three-man tier.  There was no air conditioning – only outside air coming in through vents to keep them cool.  On the Mauna Kea, they had a foam mattress, a locker next to the bed, a reading light, and air conditioning!

Casey’s biggest remembrance while on the Mauna Kea was when they loaded part of the components of the A-bombs at Port Chicago and the rest in Honolulu.  The loading area was surrounded by dozens of armed Marines.  In 1958 they thought they were going to go to war with China because China was shelling the islands of Quemoy and Matsu.  The Mauna Kea met an aircraft carrier in the China Sea and transferred the components of the A-bomb to that carrier.

Casey remembers liberty and souvenirs in Japan being cheap since they were just recovering from the war.

In May of 1959, Casey re-enlisted for four more years so he could get two years of shore duty.  He served those two years of shore duty at the commissary store in Long Beach, CA.  The last 2 years of his enlistment was on the Navy Destroyer Frank E. Evans DD-754.  Six years after Casey left the Frank D. Evans, seventy-four shipmates lost their lives when the aircraft carrier HMAS Melbourne cut the Frank E. Evans in half during a naval operation on June 3, 1969 and the forward half of the ship sunk.

After serving eight years in the Navy, Casey left in 1963 as SK1.

Casey would have made a career out of the Navy, but his wife at that time gave him an ultimatum – get out or give me a divorce.  Needless to say, he got out but divorced six years later.  They had a boy and two girls.

Casey went to work as an assistant manager for a company in California called Korody Marine Corporation that sold diesel engine parts.  He was also attending college part-time.  After several years with the company, he was promoted to general manager.

In 1969 the company was sold.  In 1970 Casey went to work for Interstate Diesel in Cleveland, Ohio as their Sales Manager.  It was in Cleveland that Casey met Barbara Otrhalik at a Halloween party, and they were married in June of 1973.  They have been married 45 years.

As Sales Manager for Interstate Diesel, Casey travel to all 50 states.  The company wanted to expand into other countries, including Spanish speaking countries.  Casey had taken Spanish in high school and college, and soon found himself covering 25-30 countries a year.  He experienced many interesting situations on those travels.  Here are just a few.

On a trip to South America in 1975 he met the movie actor Jack Nicholson in Panama, who was on his way to a movie premier in Cartagene, Columbia.  Jack asked Casey if he liked his movie “Easy Rider” and Casey told him that he did not like it because profane language was used.

A week later, Casey spent the weekend at the hotel where the premier was being held.  He met Jack (along with other actors and actresses) and he remembered Casey’s comment about “Easy Rider”.  This event was very exciting for the “small-town” boy. He grew up in the small town of Del Norte, Colorado which had a population of eighteen hundred.  Over the years, he had the opportunity to meet many famous people.

On February 4, 1976 Casey was in Guatemala City, Guatemala when they suffered a devastating earthquake which left 23,000 people dead and millions homeless.  The hotel he was staying in lost part of the building.  He could have been one of the victims, but thank God he survived.  His business agent was able to book the last seat on a flight to San Jose, Cost Rica that day.  Once he checked into the hotel in San Jose, he went into shock.  He called his wife to let her know he was alive and in which country he was staying.

In 1980 he was in Athens, Greece awaiting a flight to Beirut, Lebanon.  A civil war was taking place in Lebanon and their airport was being shelled.  His flight was diverted to Larnaca, Cyprus, where he had to spend four days waiting for a flight out of that country.  The hotel he was staying in had lost elevator service and he had to carry his suitcase up to the 7th floor – the bell hop refused to carry it.  Every time he left his room, he had to climb 7 flights of stairs.

In 1985 he was in Damascus, Syria and had a flight booked to Bagdad, Iraq.  Once again, his flight was cancelled and he was stuck in another country.  He met a fellow airline passenger who also had to get to Bagdad.  There were no planes they could charter, so they took a taxi!  The cab ride was over 700 miles across the desert with herds of camels to see for scenery.  They had 40/70 air conditioning in the car (4 windows rolled down at 70 miles an hour).  After 14 hours in the taxi, they arrived in Bagdad that night and he was able to conduct his business the next day.

Barbara accompanied him to the Middle East.  They went to Israel, where they visited the Wailing Wall, Jerusalem, and Bethlehem.  This was a very spiritual trip for them.  They also waded in the Dead Sea in Jordan.  In Egypt, they had their pictures made with the pyramids and sphinxes.  In Saudi Arabia, Barbara had to cover all exposed skin according to their religious beliefs.

Casey and Barbara with

Casey’s work took him to all of the countries in South East Asia and Oceana.  Parachuting in Brisbane, Australia was a big thrill for him.

In 1973 Casey obtained his pilot’s license to fly single engine aircrafts.  On one of his trips to Panama, he had nothing to do on the weekend, so he took the instructor up for a ride and passed the exam to fly in the country of Panama.

His hobby was flying and he was certified in five different types of aircraft.

He is no longer active in any organizations, but over the years he had volunteered to help with bingo at his church, served as Service Officer for the local American Legion post, and was president of the Sierra Vista Police Academy for five years (Barbara was secretary/treasurer of the Police Academy at that time).  He also assisted in the Elks bingo kitchen.  He is responsible for the American flags at the 55-plus gated community where he and Barbara live.

Casey says he is starting to slow down at 81 years of age, and he finds himself doing a lot of reading.  His bucket list includes taking a few more ocean cruises and trips while he still can.

In the year 2000, Casey retired as Vice President of Interstate-McBee.  In 2003 he and Barbara moved to Arizona, and they have not regretted it for one moment.   His son lives in California, and his oldest daughter lives in Texas.  Sadly, they lost their youngest daughter at the age of 54 in 2015.

Casey, thank you for you service.

We look forward to seeing you in Milwaukee... 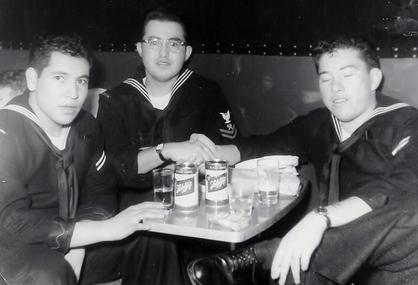 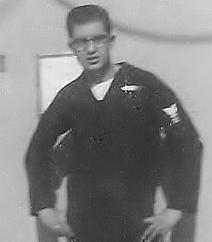 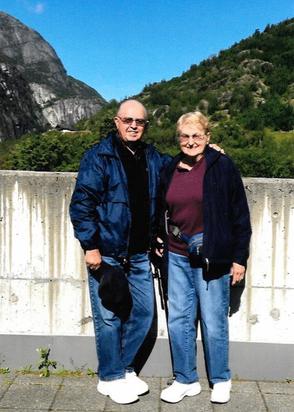 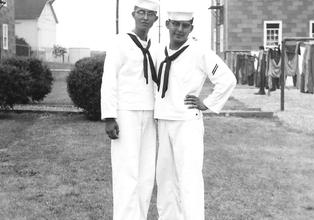 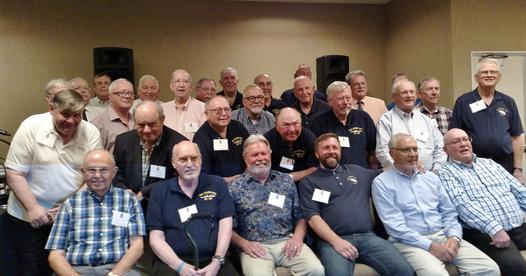 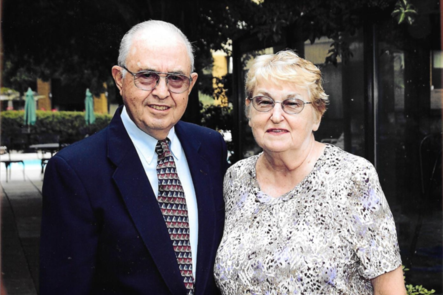 Casey with shipmates at 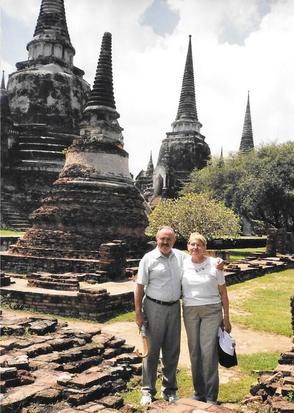 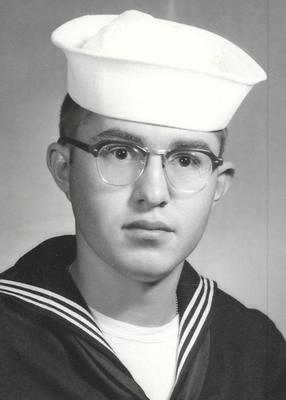 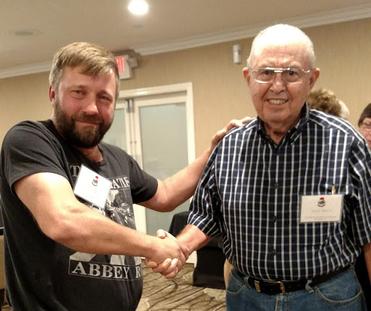 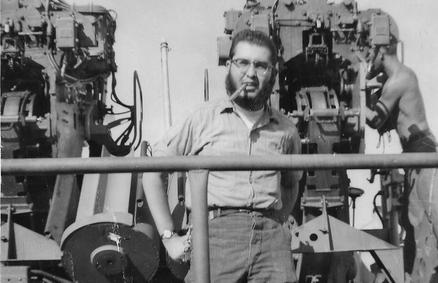 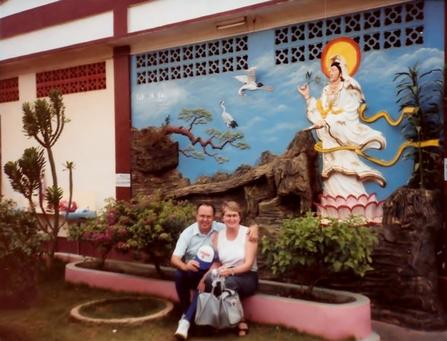