Lawrence (Larry) Foss grew up in Middlefield, Connecticut.  He would go into the nearby town of New London with his family to shop.  When Larry was 6 ½ to 7 years old, he began noticing that many of the young men in New London were dressed alike – many were wearing blue uniforms.  He questioned his father who explained that these men were in the US Navy.  He told Larry that these young men traveled around the world and served their country.  As Larry got older, he started to see signs that said, “Join the Navy – It’s an Adventure”.

Larry had always liked the water and boats, so before long he decided that this was the life he wanted to live.  He wanted to start that life soon so in July, 1965, he dropped out of high school and joined the Navy.

Larry completed his boot camp at Great Lakes, Illinois.  He was sent to San Diego and placed in a holding company with a group of other recent boot camp graduates until he was given a permanent assignment.


In 1966, Larry and the other sailors who had been in the holding company were then assigned to the Mauna Kea AE-22 in Bremerton, Washington. The ship was undergoing modifications and was not ready for them to board.  In the meantime, the Navy was looking for volunteers to “go underground” and work in the bomb shelters in Bremerton.  The water stored in those shelters had been there a very long time, and needed to be replaced with fresh water.  Remember, Larry always liked the water (but this was probably not exactly the water he had in mind), so he volunteered for this assignment.

Finally, the modifications were complete and the Mauna Kea was recommissioned.  The new crew, including Larry, began the shakedown cruise and underway training.

The ship was loaded with bombs and was underway.  The adventure had begun and he was going to travel the world.  First stop, Hawaii!!!  After three days R & R the Mauna Kea was underway again with another far-away destination – Viet Nam.

Larry was assigned to the Deck Division.  While in that division, he chipped paint, sanded, and painted anything that needed to be painted, including the anchor.  Although Larry was not a barber, he could give a pretty decent haircut.  He was an “unofficial” barber for a while, cutting hair anywhere you wanted to meet him.  He was finally assigned to work in the barber shop for a while until a real barber (Randy McLaughlin) came aboard.

During a portion of the time assigned to the Deck Division, he worked as a “shell passer” on Mount #32.  His favorite assignment in this division was maintaining the Captain’s gig.  He kept it cleaned and polished and looking great for Captain Sells.

After two years, he passed the required courses and was transferred to the Supply Division.  He reported to Rich Letarte at that time.  On this assignment, Larry worked in the laundry, and was responsible for the vending machines and the ship’s store locker room.  One bothersome vending machine on board had a habit of dispensing soda without a cup, or just keeping the money and dispensing nothing.  Larry earned a few points with Rich when he learned how to solve both of these problems.

While assigned to Supply Division, Larry was a 1JV phone talker.  He received orders out of Radio Central, relayed them to the captain, and then relayed the captain’s approval or instructions back to Radio Central.  He worked very closely with Captain Sells in this assignment.

In 2006 Larry sent Captain Sells a couple of pictures and received this note from him:


Larry completed his tour of duty in 1969 and left the Navy with the rate of SH3.  He then attended night school and attained his GED.

Larry had already secured a job before his discharge.  He went to work for Pratt & Whitney.  He worked in the Supply Department, handling jet engine parts for the JT9D engine used on the original “Jumbo Jet”, the Boeing 747.  He worked 13 days “on” – 1 day “off” for 9 to 10 hours a day.  The overtime pay was amazing.   After 4 ½ years on this job, he decided to look for a job that would make him happy, even if it would not make him rich.

Larry’s father, who was a long-time engineer with Pratt-Whitney, was not happy about this decision, but after about year, finally said he understood what Larry was trying to achieve.

Larry had always loved the outdoors so the Parks Department

seemed like a natural place for him to work.  He went to work for

the Department of Environmental Protection in 1973 and remained

there as a Park Ranger until December of 1987.  He attended college

were required for the law enforcement duties of a Park Ranger.

His responsibilities there involved all aspects of park maintenance

After leaving the D. E. P., Larry moved to Seattle, WA and worked with his brother-in-law refurbishing cottages.  He learned a lot about plumbing and woodwork in this position.

In 1999 he moved back to his hometown of Middlefield, Connecticut and went to work for the new Home Depot.   During that timeframe, Home Depot actually had people working in their stores that were experienced in different areas of home building and home repair (they also had to complete over 250 hours of computer training for their specific departments).  Larry worked in the Plumbing department, and assisted in Tools and Electrical.  He retired from Home Depot in 2015 and moved to Mt. Airy, North Carolina.

Larry was active in his local VFW from 1973 until 1987 (when he relocated to Washington). His VFW chapter built a Vietnam Memorial in Middlefield and also placed a flagpole in the local cemetery to honor all of the veterans buried there. Larry was involved in the fund-raising for both of these projects.

He traveled from Murphy, NC to McDonough, GA, where he visited with shipmate David Cannon for several days.

He plans to join us in Milwaukee.

Larry, thank you for your service. 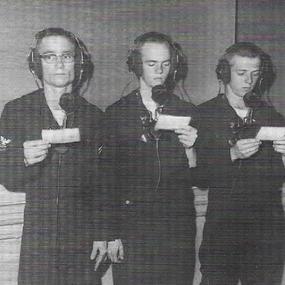 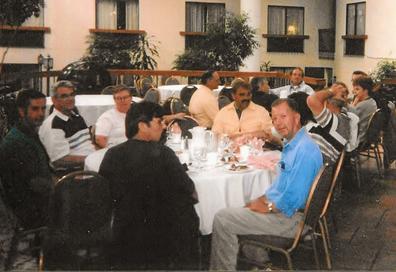 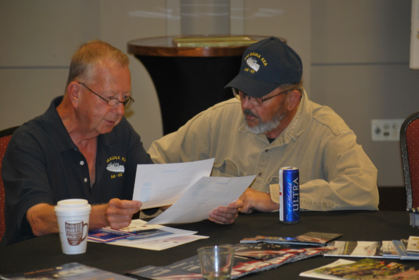 Larry on the decommissioned MK  in

…on the bridge again 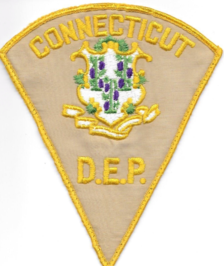 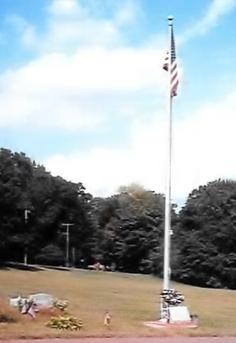 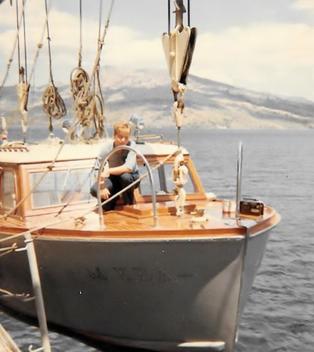 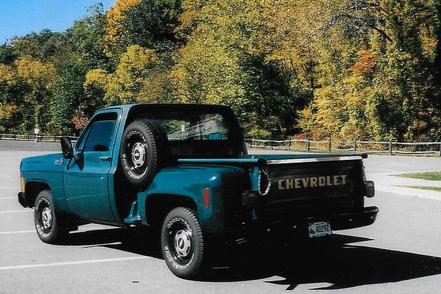 One of Larry’s hobbies is maintaining his 1977 Chevrolet ½ ton step-side short bed truck. He purchased this truck new in 1977 and he has turned down numerous offers to sell it. This is the model truck that the Parks Department used for their service vehicle. Larry drove this type of truck for 15 years and fell in love with it. He ordered one for himself, and it took six months to get it. It still runs great and looks like a new truck, thanks to Larry. He has always enjoyed fly fishing, and actually attended the Orvis School of Fly-Fishing. Walter Cronkite had been a student in the class prior to his. Larry has also taught fly fishing. (His email address is lfoss_flyfisher @...). 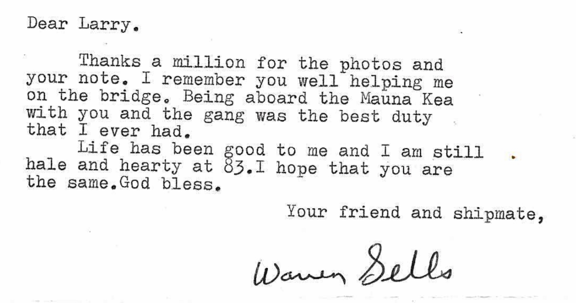 We look forward to seeing you in Milwaukee! 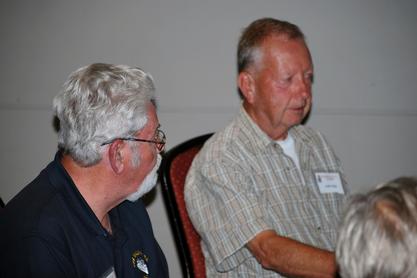 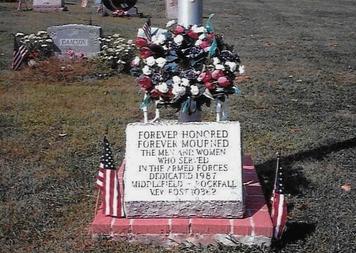 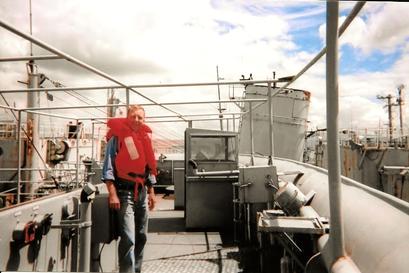 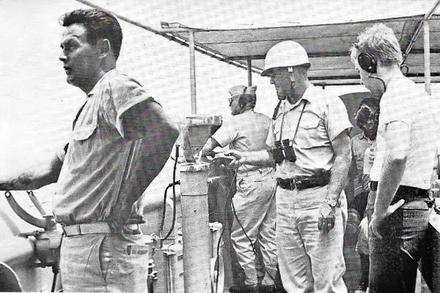 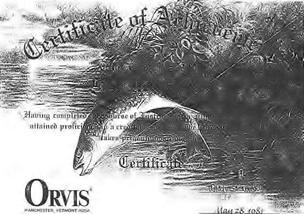 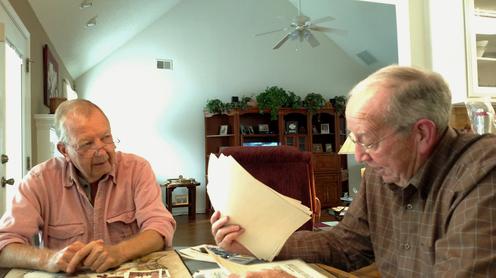 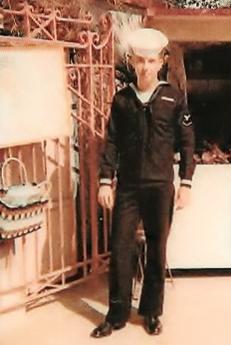 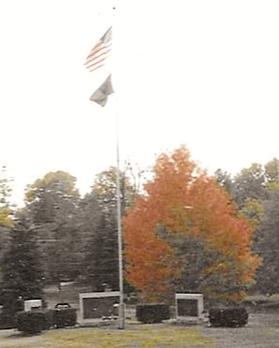 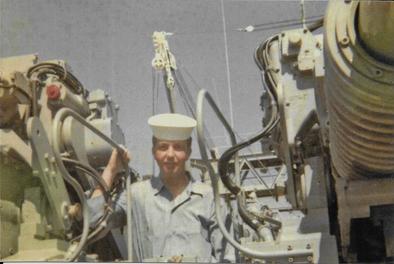 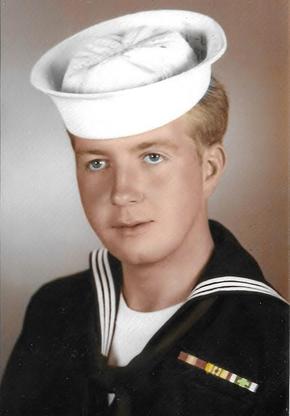 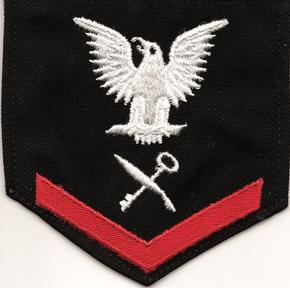 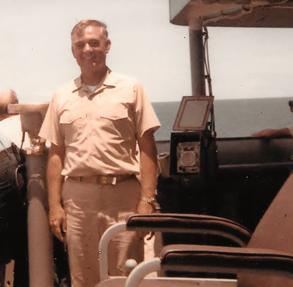 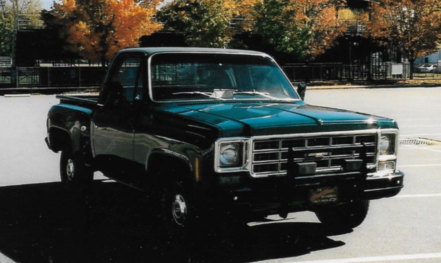