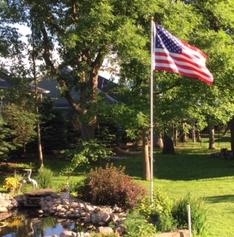 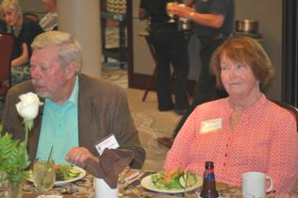 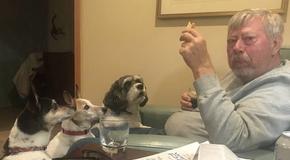 Linda and Tom with shipmates on Iwo Jima in Jacksonville 2017 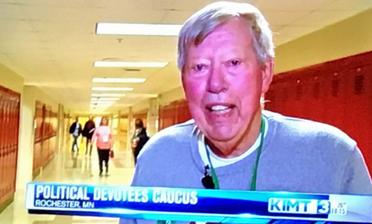 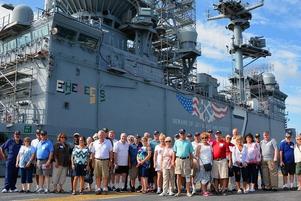 Linda and Tom both love to travel, especially by sea.  Last year Tom made a return trip to Danang while on a cruise with his wife.  They also enjoy gardening and have a Koi pond in their back yard.  The Koi survive in the frozen pond during the winter.   Tom is a lifetime member of the American Legion and VFW.  And Tom still likes being on the water in a boat, especially with his grandchildren. 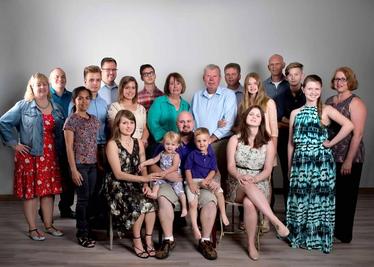 a good day with grandson at

Lake of the Woods near Canada

And the Mauna Kea reunions have been special.  He hopes to be able to get together with his shipmates soon. 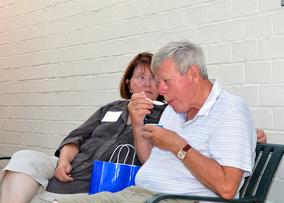 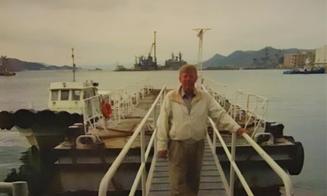 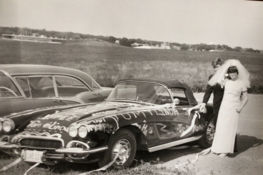 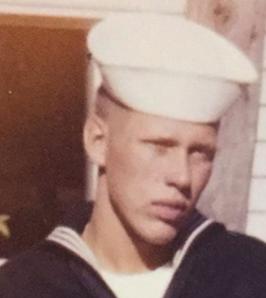 Tom being interviewed by local TV station regarding the Political  Caucus 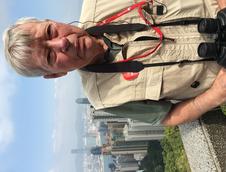 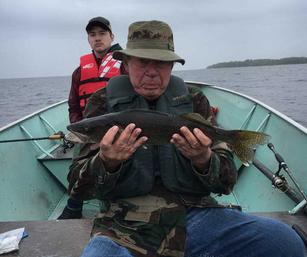 Tom graduated in 1960 with a strong desire to see the world.  This took him to the Navy recruiter in the basement of the post office.  After representing his high school on the cross-country track team in state competition, he was not too worried about basic training.   He chose San Diego for basic training because he was sure that would get him assigned on a West Coast ship.  And it happened!  Tom reported to the USS Mauna Kea at NAD Concord, Ca, along with a few classmates from 347, after a  15-day home leave at Albert Lea, MN.

In October of 1960 Tom met Willie Scott (the best petty officer he ever served under) when he was assigned to his watch section.  Willie took an interest in getting the “boots” promoted to seaman.

The Mauna Kea left San Francisco in November for Tom's first West PAC. It was quite an adventure for a nineteen- year old.  Everything was new - the underway replenishments and the ports they visited.  Tom was a small-town boy seeing the world--Yokosuka, Kobe, Sasebo, Okinawa, Hong Kong and Subic Bay.  After this cruise he transferred to operations division where he worked for the navigator as a quartermaster.

His second cruise included an unscheduled stop in Vietnam in May of 1962 where he went into Danang for two days to unload ammo.  At night they would steam around at sea.  On the way home from Japan in 1962 they made the trip in 13 days using the Great Circle route.

After completing a six-week signalman course in San Diego, Tom was transferred to the USS Takelma (ATF 113) at Pearl Harbor.  He was there from January 1963 to August 1964.  His third cruise was with a contingent of Smithsonian birders who they took from island to island in the South-Central Pacific.  And he became a Shellback on that cruise!

Looking back at his time on the Mauna Kea, the Cuban Missile Crisis in October 1962 really stands out.  The crew was assigned to the USS Ranger Task force heading south towards the Panama Canal Zone.  They were at rearming stations for 24 hours with the Ranger on starboard receiving special weapons, and destroyers on port receiving regular ammo.  Everyone felt how close they had come to nuclear war during those 13 days.  And maybe their death.

In the years that followed his discharge in August of 1964 Tom met and later married his wife.  Linda recalls that he had just returned from sea and had a great tan and sun- bleached hair.  He also had another very attractive feature – a new shiny black Corvette convertible.

Tom worked his way through college with help from the GI Bill, and began teaching social studies in 1970.  Linda and Tom had a daughter and two sons along the way.

Tom continued teaching while studying for his Master's degree and advanced degree.  At that point he became a high school principal until retiring at age 62.  He said he especially enjoyed working with the students in the classroom and being their speech coach.  And of course, he stays in touch with many of them.

There is something that most of Tom’s shipmates may not be aware of. He was elected to the Minnesota House of Representatives in 1978 and again in 1980, representing a rural district in southern Minnesota.  He said it was an honor to serve with the men and women from both parties, and with Gov. Al Quie.  He and Linda are both still active in the local election process and were elected to the MN caucus again this year.  But Tom’s interest in politics began long before his election.  As a Boy Scout, he was getting involved in politics by distributing election posters.

…the rest of the family-
Jayne, Robbie, and Patsy 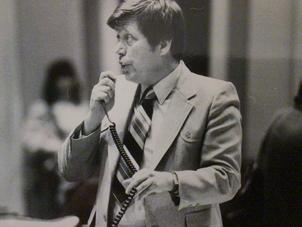 At the age of 44 Tom joined the Navy Reserves at LaCrosse PhibCB One (construction battalion), whose gaining command was San Diego.  He became a barge ferry pilot and trained at San Diego, Naples, Australia, Hawaii, and Camp Pendleton.  His daughter was active duty in the Navy for four years then joined the reserve unit where they spent four years together.  His son Lee was in the Air Force for four years.  Lee was sent to a base in Saudi Arabia mid-August 1990 during Desert Shield/Storm where he stayed until March 1991.

Tom retired from the Navy at the age of 60 and from education at 62.  He and Linda live in Rochester, Minnesota near family.  Their three children are married, and they have ten grandchildren and two great grandchildren. 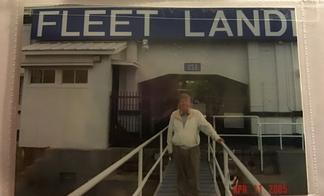 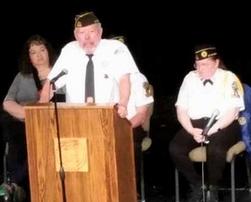 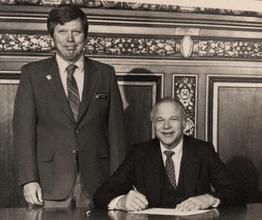 Tom, thank you for you service.

We look forward to seeing you when we are able to have our next reunion...

Tom speaking on the floor of the 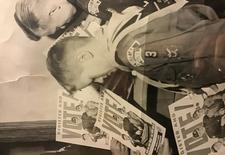 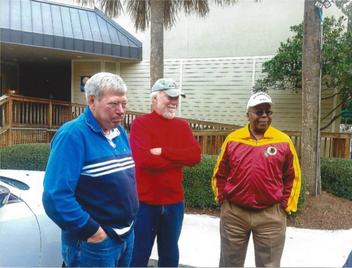 Tom and Linda at Charleston reunion

taking a break at Peterbrooke Chocolatier in Jacksonville after 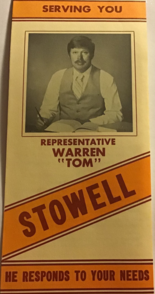