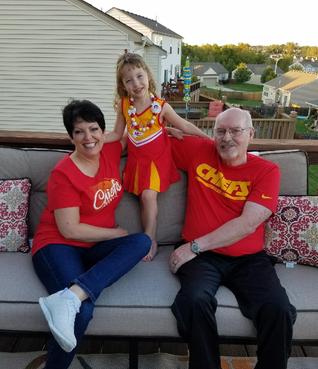 Shipmates have enjoyed reconnecting with Steven (Steve) Thummel at the last two reunions in St. Augustine and Charleston.  He stayed away too long, but he and his wife said they loved the reunions  and plan to attend future reunions.

Steve said that he knew joining the Navy was his destiny.  He had enough credits to graduate by February of his senior year of high school and a full scholarship to Fort Hays University, but he turned down the scholarship to do what he felt compelled to do – join the Navy.  He enlisted on February 10, 1966.  He comes from a huge Navy family.  His family can boast of a Commodore, a couple of Admirals, and many career officers and enlisted men.  Steve was the fourth generation to serve, and his son now represents the fifth generation of the Thummel family to serve in the U. S. Navy.

Steven left his hometown of Dodge City, Kansas as part of an all-Kansas company to go to boot camp in San Diego, California.  After graduating from boot camp, he received orders to attend Basic Electric and Electronics Preparatory  (BEEP) school in San Diego.    Upon completion of BEEP school, he received orders to attend Radarman “A” School at Treasure Island Naval Base.  He has a few vivid memories about San Francisco during this time.  When they were going on or returning from leave, the taxi drivers would let them out about two blocks from the bus station.  This was the height of the hippie and protesters era, and as they walked to the bus station, the protesters would spit on them, hit them, and call them names.  In contrast, when he went home to Kansas on leave the local citizens would buy them dinner and drinks, and even pray for them by name in church.  He said San Francisco was quite an eye-opener in 1966-1967.

Upon graduation from “A” School in March of 1967, he requested duty on an ammunition ship deployed to Viet Nam.  The Navy granted his wish and he went aboard the USS Mauna Kea in March, 1967.  He was assigned to the Combat Information Center as a Radarman.  He must have done a good job there since the Mauna Kea did not collide with another ship or run aground during his time in this assignment.  He was promoted to 3rd Class and then 2nd Class Petty Officer.  He spent 3 years (1967-1970) attached to the Mauna Kea.

Steve made many friends on the Mauna Kea, and was happy to see some of them again at the reunions in 2015  and 2017.  He remembers that the Mauna Kea set a lot of records in the Tonkin Gulf, and that they enjoyed visiting many R&R locations to include Hong Kong, Australia, Singapore, Thailand, Hawaii, the Philippines, Japan, and De Nang. He remembers a boat accident that he thought almost killed him.  He was returning from a mail run in the Number 2 utility boat.  An accident occurred near the ship.  Steve had to be rescued from the water, and suffered a severe head injury.

He remembers the ship’s band playing “Sleep Walk” by the Ventures while conducting an unrep in the middle of the night (that song still gives him goosebumps when he plays it).

While re-arming the USS Ranger, he saw his Uncle Ralph, who was a Master Chief at the time.  The swim calls, BBQ’s on the helo deck, mail call, navy chow, and crossing the equator bring back fond memories.  He remembers the “hate” sessions, where he and shipmates used to blow off steam about the war (they hated unsupportive politicians who were making policies, draft dodgers, draft card burners, protesters, etc.).  He will never forget his first trip in a boatswain’s chair between two ships while underway, and helo transfers.  He served with some of the greatest friends he made in his life.  Age, religion, race, wealth, or education never mattered on the Mauna Kea.  He served under Capt. Sells and Capt. Polk.  He said Capt. Sells was always proud of his crew and had their backs at all times.  Capt. Sells was a fair man and ruled with a soft but firm hand.

After leaving the Mauna Kea, he served one TAD on the USS Vega AF-59.  After serving three tours in Viet Nam and four years in the Navy, he was honorably discharged in 1970 and spent the next two years in the Naval Reserves as a RD2.

After leaving the Navy, Steve returned to a job with the Kroger Corporation.  He had begun working there as a “sack boy” when he was 15 years old.  He retired from a position in upper management with Kroger after 38 years.

While working in management for Kroger, Steve attended two years of junior college studying Psychology, and then studied Theology. He put in many hours working and going to school at night.

A lot people were surprised to find that Steve was ordained as a minister in 1973.  He was assigned to a nondenominational church where he performed weddings, funerals, and baptisms.  He visited the jails, hospitals, and nursing homes.  He was also a trained hospice minister, interacting with families and offering support to those dealing with end-of-life situations.

After retiring from Kroger, Steve attended the Law Enforcement Academy and became a Deputy Sheriff in Ford County, KS and was involved in all aspects of law enforcement.  He retired after 10 years in law enforcement in 2012.  He then worked for a funeral home, performing all duties associated with this profession.

Steve and Delita have been married for 33 ½ years.  She is somewhat younger than Steve, and she loves to tell people that he picked her up while cruising the parking lot at her junior high school while he was on his lunch break.  That’s not entirely true…  He met her in 1983 while he was managing a Kroger.  The young Delita quickly whipped Steve into shape, and they were married in 1984.   They have two sons.  Aaron, their oldest son, is an I.T. specialist and is currently in college pursuing a degree in Cyber Security.  He and his wife Danyelle are the parents of Steve and Delita’s beautiful 5 year old  granddaughter Adalynn.  His youngest son, Bryce, has a degree in Nuclear Engineering and was commissioned as an Ensign in the U. S. Navy on October 1, 2017.  He and his wife Rachel will  reside in Port  Orchard, Washington.  Rachel will teach school and Ensign Thummel will be a Nuclear Regulatory Officer at the Puget Sound Naval Shipyard.  We have had the privilege of meeting Bryce and Rachel at the reunions. ( Bryce was Chief Thummel at the last two reunions.)

In 2014, Steve and Delita moved to Kansas City, MO.  Although Steve has retired, Delita still works as a Registered Nurse.  Steve has now taken over all of the household duties (this is Steve’s version – would love to hear Delita’s version) and has become a full time husband and grandparent.  He says this is the best job he has ever had.

They are very active in their church.  Steve states that he has a close relationship with God.  He has experienced many heath issues including various types of cancer, five heart attacks, a stroke, open heart surgery, multiple stents, and two back surgeries.  He has had many experiences with death (three previous wives and a sister died young).  He dealt with death as a hospice minister and while working in the funeral home, but he has no fear of death.

He has also dealt with positive life issues.  He has delivered two babies, and saved two people with CPR.

Steve and Delita enjoy traveling.  They are planning an Alaskan cruise next spring,  and attending the Mauna Kea Reunion in the fall of 2018.  They plan to visit Hawaii for their 35th wedding anniversary in 2019.

He is now assisting several other Veterans regarding Agent Orange issues.

Steve, thank you for your service. 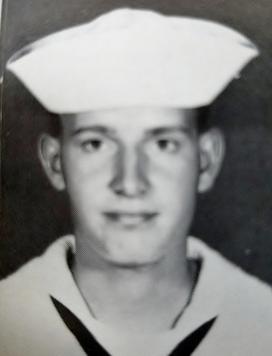 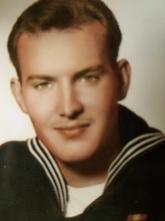 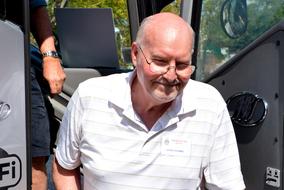 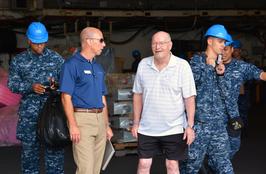 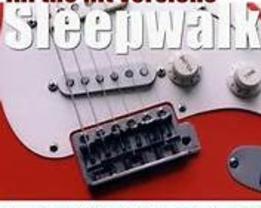 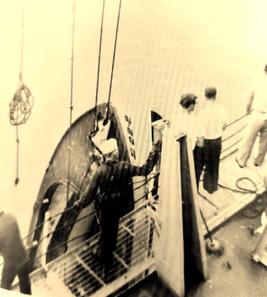 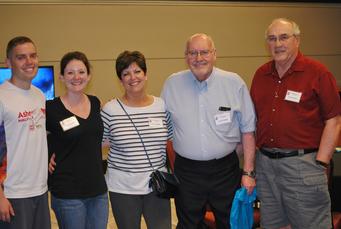 Utility boat Number 2 being lifted       aboard after Steve's accident. 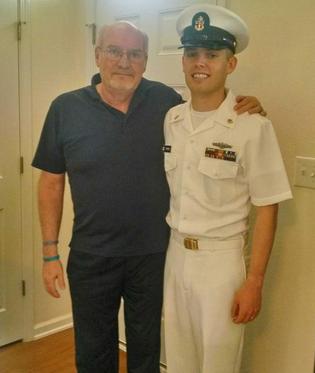 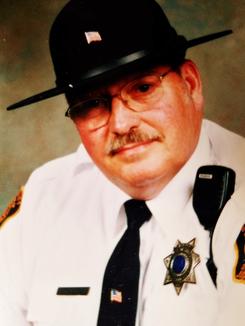 Aboard the USS Iwo Jima 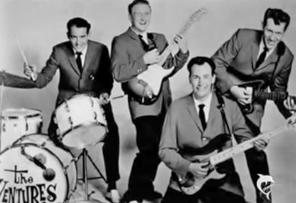 We look forward to seeing Steve in San Diego...