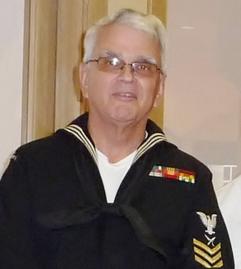 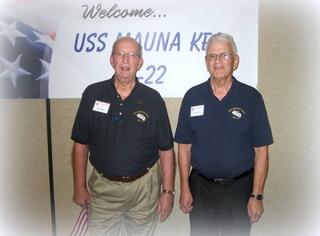 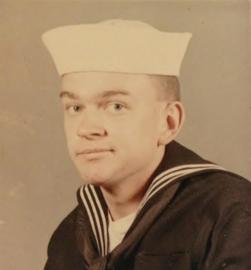 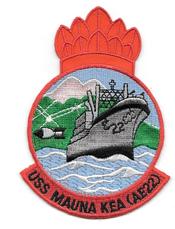 We look forward to seeing Dick in Charleston... 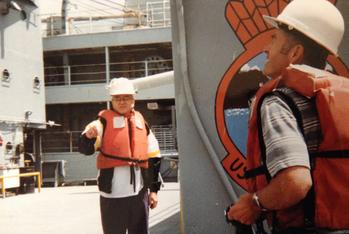 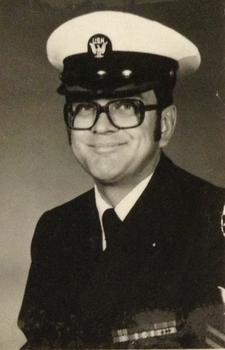 Is he wearing the same size uniform in every picture???? 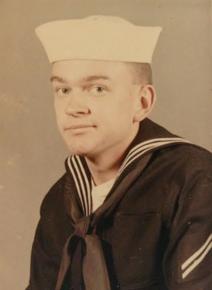 If you have enjoyed the reunions in the past, thank Dick States for getting a small group of shipmates together for the first reunion in 1999.  For the first two years after he retired, he spent countless hours on the computer searching for former shipmates. He had a very strong desire to see these guys again.   In those years, email was not the common means of communication, and the search engines we take for granted today did not exist.  The first shipmates that Dick contacted were Rich Letarte, John Oldberg, and Jerry Mouton who encouraged him to continue with the project  With these shipmates on board with Dick, the ball was rolling.  With the use of the U.S. Postal Service and expensive long-distance telephone calls, the first reunion was held in Concord, California with 22 shipmates in attendance.  Not only did Dick find his shipmates, he found the Mauna Kea!  The first reunion included a tour of the decommissioned ship. The rest is history.


Dick has played a part in planning many of the reunions, and has maintained the Rosters and a list of those shipmates who have departed.  He has also collected the dues and maintained the financial records for the Mauna Kea Reunion fund all these years.  Thanks for your initiative and your persistence.  Thanks, also, for taking a chance on planning that first reunion.  Dick and Sharon have attended every reunion.

Dick enlisted in the Navy in 1965.  After completing boot camp at Great Lakes, Illinois he attended CYN “A” school.  After completing this training, he was assigned to the Mauna Kea, where he served as a Communications Yeoman, CYN3, until his discharge in 1969.  In this assignment, Dick was able to receive some news from the “outside world” on his 1050 teletype receiver.  He shared that news with the crew via his ship’s newspaper.  It is noted in the ‘68 Cruise Book that Dick singlehandedly put out the news in his Mauna Kea Journal.  Even though Dick’s assignment did not allow him to be fully involved with activity on the deck, he was proud to be part of the ship and felt that bond so strongly that he wanted to reunite those shipmates.

Dick and Sharon were married in 1968, while he was serving on the Mauna Kea.  She is an "original" Mauna Kea wife.

After his discharge in 1969, Dick went to work for Southern Pacific Railroad, where he worked for nine years.

In 1972, Dick enlisted in the Naval Reserves.  For the next eight years, Dick worked his civilian job while serving as a Radioman in the Reserves.  He enjoyed flying out to the ships with his unit and getting underway while on Reserve duty.

In 1980, he decided he wanted more, so he re-enlisted in the U. S. Navy Reserve as an active-duty TAR.   For the next sixteen years, Dick served as a Yeoman (there were no Radiomen in the TAR program).  He not only handled classified information, but he taught classes on how to handle classified information (sounds like your services could be put to use in the White House now).  While stationed at the Naval Reserve Readiness Command Center in Washington, DC, he was the Admiral’s Yeoman.  His assignment at Willow Grove NAS required travel to Spain and Bermuda periodically.  During these sixteen years, he and Sharon had to move approximately every three years.

Dick retired from the Navy in 1996.  He then went to work for a government contractor at the Missile Defense Agency.  His duties in this career involved reviewing classified information to determine how it should be distributed.  Dick traveled between his office and the Pentagon on a regular basis.  On 9-11, Sharon spent most of the day wondering if Dick was in the Pentagon when the attack took place.  Late in the afternoon, she finally received the message that he was O.K.  He retired from MDA in 2008 as a Security Operations Specialist/International Security Analyst with Qinetiq (a security/defense technology company).  He still holds a Top Security clearance.

In addition to planning reunions, Dick and Sharon enjoy traveling.  They have traveled in 44 of the 50 states.  In 2014, they went to Hawaii with three other Mauna Kea couples.  In spite of Hurricane Iselle hitting the island while they were there, they were still able to visit Mt. Mauna Kea.  They have also traveled to Canada and Columbia, South America.  While in South America in 2015, Dick became very ill after being at an altitude of about 13,000 feet for about a week.  As it turned out, this had caused extreme dehydration.  It seems the old sailor just spent too much time out of water.

Dick and Sharon live in Tucson, Arizona where Dick is a Deacon in the church they helped form five years ago.  Dick volunteers at the Retired Affairs Office on Davis-Mothan AFB.  In addition, he also works with the VITA (Volunteer Income Tax Assistance) office on base.

In addition to trying to locate shipmates, Dick started a search several years ago for former minor league baseball players from the team from his hometown.  He found many of them (or their families), interviewed them, and wrote an article about them which was published in the local newspaper earlier this year.

Dick, thanks for all your hard work with the reunions, and thank you for your service.