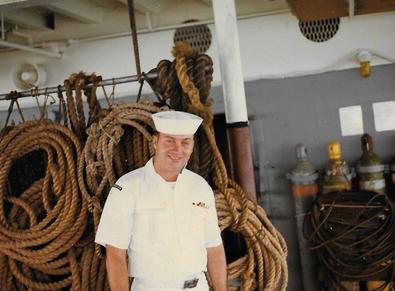 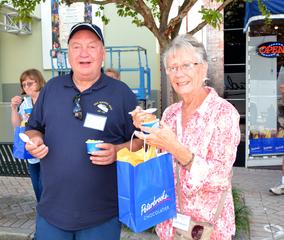 We always enjoy seeing James (Jim) "Steamboat" and Loretta Salsgiver at our reunions.  They began attending reunions when the 2nd reunion was held in Virginia Beach, and have attended several since then.

Jim’s hometown was the borough of Tidioute, Pennsylvania.  This borough was once an Iroquoian Indian Reservation (in 2000, the population was 792 people).  Tidioute is located on a sharp bend in the Allegheny River.  Several small, very cold water “cricks” fed into the river.  Jim learned to swim and dive in these creeks located near his home.

Jim decided that he wanted to join the Navy when he was 14 years old.  He always wanted to travel and go to new places – join the Navy/see the world.

His first assignments in Boot Camp were to wash clothes, stand guard, and march!!!

OK, enough of this.  He was ready to get on that ship and go places.  He was assigned to the Mauna Kea and after he boarded the ship found out that his first “port of call” was Vietnam.  Not exactly one of the places he had been waiting to visit…

Jim was assigned to the 2nd Division.  He gave some thought to asking to be trained as a machinist mate.  He thought that he could use the machinist training after he got out of the Navy.  However, the thought of spending most of his time “down in the hole” made him decide to stay where he was.  He spent most of his time taking care of the Bos’n locker.  He worked the cables and winches during unreps.

Jim enjoyed spending time with his shipmates.  In their free time, they would soak up some sun on the Helo pad.  And of course, there was swim call…

Jim also served as a mess cook for a while.  He says he got some good experience there and learned that he actually liked to cook.  He still likes to cook and now cooks at home.  He did learn that there was a better way than the Navy way to prepare food.  Check out Jim and Loretta’s Facebook page, and you will see lots of good recipes posted.

Jim left the Navy in November, 1969.  He stayed in just a little longer than his four year enlistment.  He was a BM3 at the time of his discharge.

Jim went home to PA and began working at Titusville Dairy Products.  He made ice cream, cottage cheese, and yogurt.  He retired in 2010 after working there almost 40 years.  He left Titusville Dairy a couple of times to work as a machinist, but always returned to the dairy.

Jim met his wife Loretta in 1986.  Jim likes to tell everyone that Loretta is 10 years older than he is, and she used to be his babysitter.  His mom and dad couldn’t afford to pay her, so they just gave her Jim for payment.  Sometimes she says she should have demanded money and let them keep Jim.  (Of course, we haven’t heard Loretta’s side of this story).  At any rate, they've been married 26 years, so she’s had time to raise him and send him out on his own if she had decided she wanted to.

Their combined families include seven children and nineteen grandchildren.  They have children living in England;  Somerset, PA; Mooresville, NC; three live in the  Pittsburg, PA area; and son Chuck just retired from the Navy in Kings Bay, GA.

Jim likes to work with/collect primitive weapons such as bow & arrows made from hickory wood with flint or bone arrowheads.  He is also interested in wooden model ships, and would like to build one.

He loves Bluegrass music, and listens to it almost 24/7.

Jim is a purist when cooking on the grill.  No gas grill for Jim.  He wants to cook those burgers over an open fire with charcoal.   He says he can make a beautiful hockey puck out of hamburger.

He and Loretta were battling some health issues in 2017 and were unable to attend the Charleston reunion.  We were happy to see them in St. Augustine. They are both on the mend, and we hope to see them in San Diego. 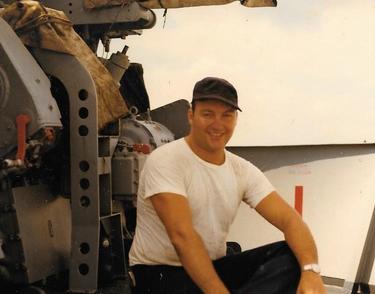 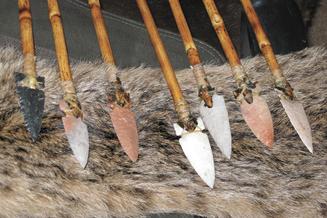 Jim, thank you for you service.

See you in San Diego. 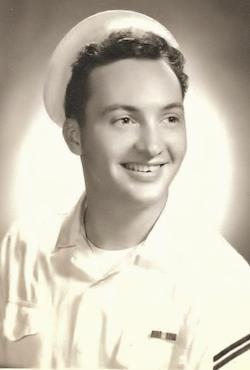 Jim (left) with fellow shipmates from 1965 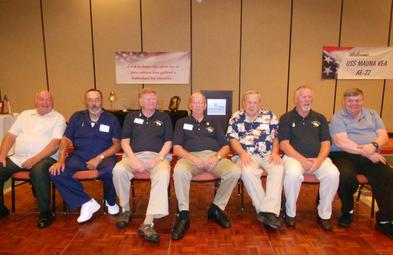 YUM!!  Ice cream from Peterbrooke's Cholatier after a day of touring in Jacksonville -2017 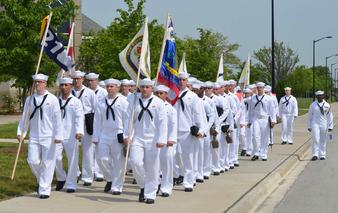 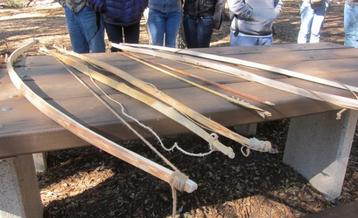 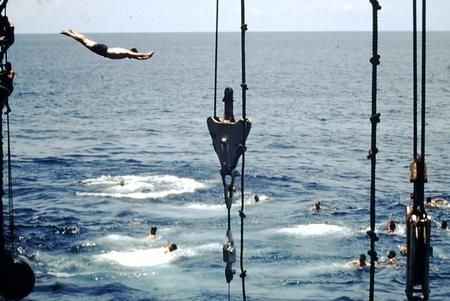 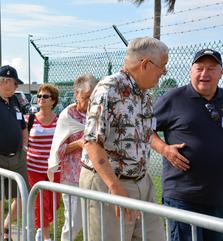 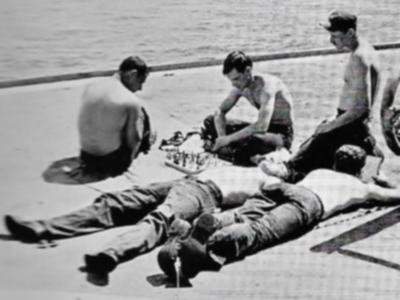 Do you think they remembered to apply their sunscreen? 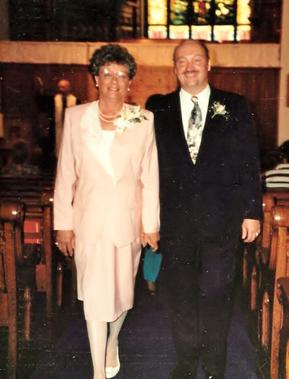